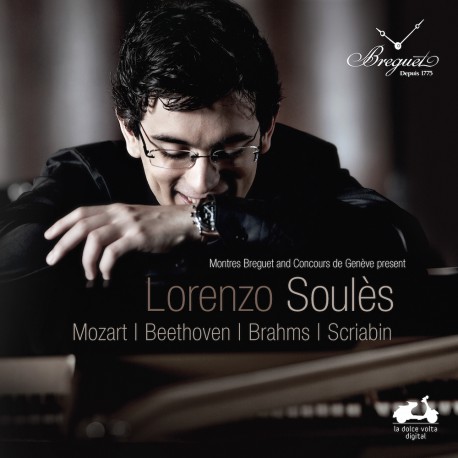 The youthful Lorenzo Soulès, laureate of the 67th Geneva Competition, has chosen a programme of mature works for his first disc:

A Mozart concerto among the most serious in the repertoire, a late cycle by Brahms, a restless set of variations by Beethoven, and Scriabin’s sombre Sonata No.9. A mood well suited to this thoughtful and profound young man, conscious of both his talent and his individuality; and a generally melancholic colour, in which tragedy prevails over virtuosity.

He sees this challenging programme right through to the end, presenting Mozart with grace and simplicity, well supported by Simon Gaudenz, revealing the virtuosic subtleties and profundities of Beethoven, radiating sadness and serenity in Brahms and plunging headlong into the mystical depths of Scriabin.

Lorenzo Soulès was born into a family of musicians in Lyon, where he began playing the piano at the age of three. When he was eight he entered Olivier Gardon’s class at the Conservatoire à Rayonnement Régional de Paris, from which he graduated at the age of thirteen having won all the prizes.
This was a very early age to make the crucial choice of the teacher to whom the responsibility of continuing his musical studies was to be assigned. It was decided he should work with Pierre-Laurent Aimard and Tamara Stefanovich, both professors in Cologne, where Lorenzo went to live. In parallel with this he studied the complete Iberia in Barcelona with the great Alicia de Larrocha.

In 2012, at the age of twenty, he decided to embark on his first major international competition. His choice was the prestigious Geneva Competition. Lorenzo, a young man as discreet in everyday life as he is inspired and vibrant in his music-making, met with unanimous approval from jury and public, winning all the prizes: First Prize, Coup de Cœur Breguet, Audience Prize, Young Audience Prize, and Air France KLM Prize.

The 2013/14 season will see him appearing, among other venues, at MIDEM in Cannes, Dortmund, the Victoria Hall in Geneva, Weimar, Radio France, the Aldeburgh and Davos Festivals, Festival des Haudères and Festival du Périgord Noir, the Ruhr Piano Festival, Les Flâneries Musicales de Reims, and Les Solistes à Bagatelle in Paris.
He will also participate in the Geneva Competition Prizewinners Festival in December 2013 and will benefit in 2014 from several productions organised by the Geneva Competition, including a tour of Asia alongside the Armida Quartet.

The OCG (Geneva chamber Orchestra) is an ensemble that promotes excellence in all repertories, thus introducing the public to works too rarely played in concert halls as a rule.

Many renowned conductors and soloists have helped forge the identity and originality of the OCG, among them Armin Jordan, Ivor Bolton, Rinaldo Alessandrini, Thomas Rösner, Natalie Dessay, Sandrine Piau, Véronique Gens, Andreas Scholl, Patricia Kopatchinskaja, Aldo Ciccolini, and numerous others. From the 2013/14 season, Arie van Beek, a frequent guest conductor for the past three seasons, has been appointed appointed artistic and music director in order to consolidate and develop his mark on the orchestra.

In addition to its evening concerts, the OCG works closely with various Genevan cultural partners including the City of Geneva, the Grand Théâtre de Genève, the Geneva Competition, the Haute Ecole de Musique, the Opéra de Chambre de Genève, and the city’s various choirs, as well as the Orchestre des Pays de Savoie.

On receiving the Deutscher Dirigentpreis in 2009, Simon Gaudenz became the winner of the most richly endowed conducting prize in Europe.
A sought-after guest conductor, he is frequently invited to appear with the Bavarian Radio Symphony Orchestra, the Dresden Staatskapelle, the Orchestre National de France, the Orchestre National de Lyon, the Orchestra of the Bavarian State Opera; the philharmonic orchestras of Monte Carlo, Strasbourg, Stuttgart, Oslo, Düsseldorf, Nuremberg, Bremen, Luxembourg, Radio Saarbrücken, and Rheinland-Pfalz; the symphony orchestras of Berlin, Basel, Tyrol, and Radio Stuttgart; the Russian Philharmonic Orchestra, the Zurich Tonhalle Orchestra, and the Orchestra of the Konzerthaus Berlin, among others. He regularly performs alongside such soloists as Gidon Kremer, Barbara Bonney, Viktoria Postnikova, Arabella Steinbacher, Lauma Skride, Sebastian Knauer, Lise de la Salle, Martin Stadtfeld, and Andreas Brantelid.

From 2004 to 2011, Simon Gaudenz was the principal conductor of the Collegium Musicum Basel, after four years at the head of Camerata Variabile in the same city. He was appointed Principal Guest Conductor of the Odense Symphony Orchestra in 2010. He has participated in many radio recordings and CDs.
Simon Gaudenz studied clarinet, composition and conducting in Lucerne, Graz, Freiburg, and Salzburg, with teachers including Leon Fleisher, Kurt Masur, David Zinman, Eliahu Inbal, Reinhard Goebel, and Arnold Östman. In 2010 he was invited to be a member of the jury at the Gennady Rozhdestvensky Competition in Moscow along with Sir Simon Rattle, Bernard Haitink, Paavo Berglund, and Neeme Järvi.