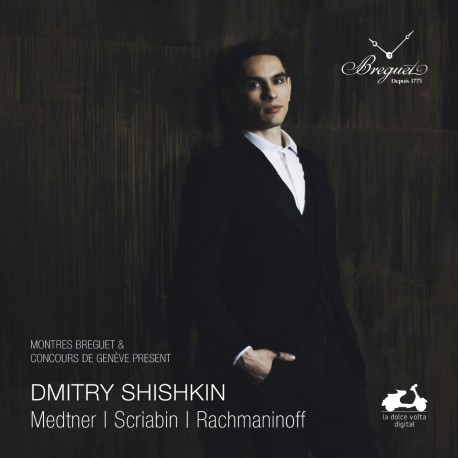 Dmitry Shishkin comes from the Urals, like Nureyev, whose elegance and inner fire he shares.

Three prodigious personalities of Slavonic culture whose works followed very different paths. Nevertheless, from the very first bars of the scores recorded here, there is no doubt that this is Russian music . . . After attracting attention as one of the finalists at the 2015 Chopin Competition, Dmitry Shishkin took First Prize at the 2018 Geneva Competition, then Second Prize at the Tchaikovsky Competition in 2019.

The young Russian pianist Dmitry Shishkin is critically acclaimed by the international press, which stresses his creative approach to music, his individuality and his brilliant pianistic skills: ‘In Shishkin’s playing we can hear both excellence and playfulness.’ In June 2019 he was awarded the Second Prize and Silver Medal at the Sixteenth International Tchaikovsky Competition. In November 2018 Shishkin won First Prize at the Seventy-third Geneva International Music Competition, at which he performed with the Orchestre de la Suisse Romande.

‘Listening to his playing, I am reminded again and again of what one famous German publisher (S. Fischer, publisher of Thomas Mann) liked to say of manuscripts – either there is charm, or there is not. Shishkin’s charm lies primarily in his performing individuality. It is conveyed in all aspects of his playing: in the sound and its colours, in the use of the pedal to bring out even more colours and at the same time transparency, in its natural phrasing, in its rubato – light and poetic’, the pianist Boris Bloch has said of him.

Born in Chelyabinsk, in Siberia, Shishkin demonstrated exceptional talent for the piano while still very young, giving his first solo recital at the age of three and his first concert with orchestra at the age of six. Three years later he entered the prestigious Gnessin State Musical College for gifted children in Moscow (class of Mikhail Khokhlov) then the Tchaikovsky Conservatory (class of Eliso Virsaladze). He is currently continuing his studies with Epifanio Comis at the Istituto Musicale Vincenzo Bellini in Catania, Sicily, and with Arie Vardi at the Musikhochschule Hannover.

From a very early age, Dmitry Shishkin won many prizes at competitions, awards and scholarships, both in Russia and abroad. He has been a prizewinner at such renowned competitions as the Busoni in Bolzano (Third Prize in 2013), Rio de Janeiro (Second Prize in 2014), Chopin in Warsaw (Sixth Prize in 2015) and Queen Elisabeth in Brussels (finalist). He also won First Prize at the Top of the World Competition in Tromsø (2017).

Dmitry performs throughout the world.