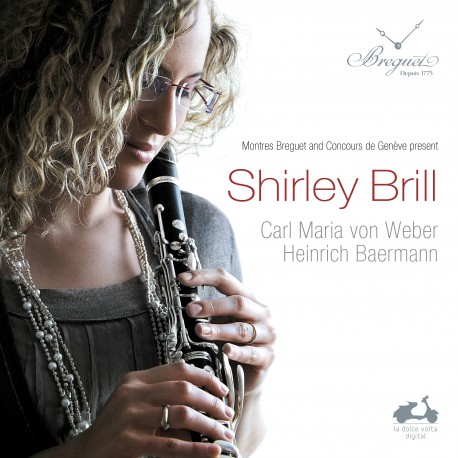 The young Israeli clarinettist Shirley Brill presents a programme of outstanding coherence dedicated to her instrument.

She showcases one of the major composers for her instrument, Carl Maria von Weber, whose concertos are well known while his magnificent Quintet is less often heard.
Both works here were written for his friend Heinrich Baermann, one of the great virtuosos of the period, who also composed an extremely fine quintet almost forgotten by music lovers. This programme immerses us in a period of experiments and innovations for an instrument that Mozart adored and which the Weber-Baermann tandem raised to its zenith. Shirley Brill deploys a gentle, refined sonority, highly nuanced yet full of energy; her technical and artistic mastery permit her to sublimate these works, which she makes even deeper and more intense with the aid of the Geneva Chamber Orchestra and the Quatuor Terpsycordes.

Shirley Brill’s career was launched with a performance as a soloist with the Israel Philharmonic Orchestra under Zubin Mehta. She has since performed with various international orchestras, most recently as a soloist with the Deutsches Symphonie Orchester at the main hall of the Berliner Philharmonie. The Tagesspiegel journal wrote about this performance: “Shirley Brill showed so much eagerness to communicate! Spectacular how the 26 year old Israeli transforms the melody lines with her most decisive performance and longest breath in Weber’s 1st clarinet concert”.

Shirley is the winner of the Geneva International Competition in Switzerland (2007), the Markneukirchen International Competition in Germany (2006) as well as a special prize recipient at the International ARD Competition in Munich.
Shirley Brill has performed at the Schleswig-Holstein Festival in Germany, the Ljubljana Festival in Slovenia and the Davos Festival in Switzerland, and collaborated with such artists as Sabine Meyer, the Borromeo and the Jerusalem String Quartets, Trio di Clarone and soprano Chen Reiss. She regularly performs with pianist Jonathan Aner as a member of the Brillaner Duo, playing in such prestigious halls as the Carnegie Hall in New-York and the Beethoven-Haus in Bonn. The Duo won the Possehl Prize in Germany as well as the America-Israel Cultural Foundation grants, and has taken part in festivals in Germany, Australia, Turkey and Israel.

Recently they served on the faculty at the Yellow Barn Festival’s Young Artists Program (USA), at the Mahler Academy in Ferrara (Italy), and coached masterclasses in different academies in Australia (including at the Australian National Academy of Music), Canada and Israel.
Committed to the creation and performance of new music, Shirley has collaborated with several leading contemporary musicians including Diethelm Jonas and Zsolt Nagy. She has premiered numerous pieces of young composers and expanded the repertoire of the clarinet through her own transcriptions.

After studying in Israel with Mr. Yitzhak Katzap, she continued her studies at the Musikhochschule Lübeck in Germany and at the New England Conservatory in Boston, USA. Working with world-renowned mentors such as Sabine Meyer and Richard Stoltzman, “Shirley Brill is on a fast track to making an international name for herself” (Prenzlauer Zeitung, Germany).

As a result of the noteworthy work of the musicians under the direction of German conductor Michael Hofstetter (2001-2007), the Geneva chamber Orchestra (Orchestre de Chambre de Genève) has developed into a first class orchestra, one which is unique in its set-up in the musical landscape of the Lake Geneva region.
Thanks to the initiative of Michael Hoffstetter, who took over the directorship of the Orchestra from Lev Markiz and Thierry Fischer, the Chamber Orchestra of Geneva (L’OCG) has developed a clear sound identity which is committed to historical interpretation. Anxious to cultivate a repertory from the late Baroque to the Romantic periods, the orchestra searches for the original sound of the performed works, among other things by using authentic instruments. The orchestra accords special esteem to undervalued or forgotten masters, which are placed alongside contemporary works.

Resident in Geneva, the L’OCG annually presents a season with six to seven subscription concerts in the “Bâtiment des Forces Motrices” which are frequently recorded by Radio Suisse Romande. In addition, it maintains close collaboration with the city of Geneva (Sunday concerts, summer serenades) and various choirs from Geneva and West Switzerland, participates in co-produc- tions with other ensembles (e.g. the Orchestre des Pays de Savoie), has engagements in the Grand Théâtre in Geneva (ballet and opera), is a partner of the “Concours de Genève” and makes concert tours throughout Switzerland and abroad.

The L’OCG is gaining more and more recognition abroad. A memorable tour of Germany in March 2006 yielded huge success and positive reviews everywhere, resulting in a renewed invitation to the Rheingau festival (Wiesbaden). A concert followed in June 2007 at America’s Cup in Valencia, and in August 2007 they made a tour of Spain with María Bayo where the concert in San Sebastián deserves special mention, having been directly broadcast from Radio Nacional de España to France-Musique and to the RSR-Espace 2. The orchestra is able to produce new CD recordings at regular intervals. Their most recent CD is devoted to Rossini arias under the direction of Michael Hoffstetter with Max Emanuel Cencic as the countertenor soloist. It was released by EMI Virgin Classics and in April 2008 was awarded the prize of l’Académie du Disque Lyrique 2008.

The 2008-2009 season of the L’OCG will be characterised through the arrival of the new musical director, 27 year old Patrick Lange, who has taken over the role from Michael Hofstetter.

During the 2008-2009 season, Patrick Lange will be principal conductor of the Orchestre de Chambre de Genève (L’OCG) and first Kapellmeister of the Berlin Comic Opera, and is one of the biggest talents of the new generation of conductors.
Born in Germany in 1981, he began his musical career at the age of 8 in the Knabenchor der Regensburger Domspatzen (Regensburg Cathedral Choir). Already by the age of 12, he had taken his first conducting lessons and as a 16 year old conduc- ted his first production in the Stadttheater Regensburg. After obtaining his Abitur (high school diploma), he studied in the music conservatories in Würzburg and Zurich and in 2005 gained admission into the “Dirigentenforum des Deutschen Musikrats” (Directors’ Forum of German Music Board). In 2007, he received the “Europäischer Kulturpreis” in the category “Förderpreis” (career prize) for young conductors.

In 2005 he was appointed by Claudio Abbado as assistant conductor of the Gustav Mahler Jugendorchester (GMJO). In addition, he assisted Claudio Abbado with the Berlin Philharmonic Orchestra, the Orchestra Mozart Bologna and the Lucerne Festival Orchestra. He has appeared as a guest with, amongst others, the Hamburger und Bochumer Symphoniker, the Beethoven Orchestra Bonn, the MDR-Symphony Orchestra (radio of middle Germany), the Mahler Chamber Orchestra and the Simón Bolívar Youth Orchestra in Venezuela. With the “Bundesjugendorchester” (Youth Orchestra of Federal Germany), he has given concerts in Hamburg, Berlin, Frankfurt and Peking.

In the field of opera, Patrick Lange has directed, amongst others, Le Nozze di Figaro and Massenet’s Cendrillon in Würzburg, L’Enfant et les Sortilèges in Zurich, La Cenerentola in Weikersheim and Falstaff in Lucerne.

Since winning the first prize at the 56th Geneva International Music Competition in 2001, the Terpsycordes String Quartet has established itself as one of the most remarkable musical ensembles of its generation. Unanimously acclaimed by the press and the public, it performs regularly on most of the finest international musical stages. Its two CDs to date ( Schumann, op. 41 and Haydn, op. 33, Claves Records) demonstrate a sensitive rendering blending finesse and fanciful touches, backed by an in-depth study of the texts and of the style inherent to each era. Founded in 1997, the quartet trained with Gábor Takács-Nagy at the Conservatoire Supérieur de Genève, where it graduated with a Premier Prix de virtuosité in 2001 and has subsequently pursued its training with the Amadeus, Budapest, Hagen, Italiano, Lasalle, Mosaïques, Smetana and Via Nova quartets. Playing two sets of instruments (classical and modern ) that enable them to cover a repertoire spanning almost three centuries, the Terpsycordes musicians, who are determined to keep their finger on the pulse of their times, regularly contribute to the creation of contemporary works through concerts as well as radio and CD recordings.