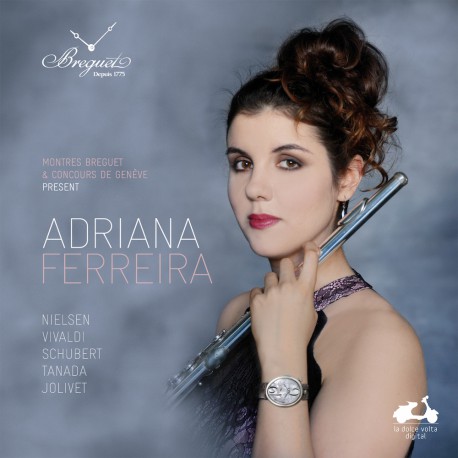 Adriana Ferreira celebrates all the potentialities of her instrument: from Baroque music to contemporary.

This project yields an extremely varied programme, in which every work is notable for its originality. To be sure, the Nielsen Concerto is one of the most frequently played (and perfectly performed here by soloist and orchestra), but what of this little gem by Vivaldi, which allows the piccolo to sing like a solo instrument in its own right? Adriana displays diabolical agility entirely in keeping with the spirit of the ‘Red-haired Priest’! And the Chants de Linos, those beautiful and amazingly modern musical poems by Jolivet, which she plays with telling passion!
The highlight of the disc, though, is perhaps to be found in the magnificent Schubert variations, a genuine tour de force, in which Adriana reveals the Romantic and sensual side of her character, admirably seconded by the marvellous pianism of Lorenzo Soulès. Equally enjoyable is the solo piece by Tanada, which shows why the flute is one of the favourite instruments of today’s composers.

Adriana Ferreira is one of the most remarkable flautists of her generation, earning the highest prizes of the presti- gious Geneva and Carl Nielsen competitions, as well as the post of co-soloist at the Orchestre National de France.

In 2012, she won the audition for the position of co-so- loist at the Orchestre National de France, position that she currently holds. Performing in numerous festivals (Barcelona, Giverny, Caravane Musicale de Monte-Carlo, Manchester, Copenhagen, Kuhmo, Charlotte...), she played as soloist with the Gulbenkian Orchestra, Odense Orchestra, Geneva and Kremlin (Moscow) chamber orchestras.

Adriana Ferreira is working with several composers and has first performed, among others, Joaquim Santos’ Flute Concerto. As a duet with pianist Isolda Crespi, she published in 2011 the CD Danse des Sylphes with Nu- merica in Portugal, followed in 2015 by a CD for the Falaut collection in Italy.

Born in Portugal, she studied at the Artave Music School (2002-2008) with Joaquina Mota. Laureate of the Calouste Gulbenkian Foundation in Lisbon, she joined the classes of Sophie Cherrier, Vincent Lucas and Pierre Dumail at the Paris Conservatoire National Supérieur de Musique (2008-2015), where she has just obtained her diploma (3rd cycle supérieur), under the direction of Hae- Sun Kang. She also studied with Benoît Fromanger at the Berlin Hochschüle Hanns Eisler and holds a Musicology Degree from the Paris-Sorbonne University.

The Geneva Chamber Orchestra did not come by its name by chance: since its founding in 1992, the Or- chestra’s home town of Geneva has been an integral part of its identity.

Seeking to reflect the specificities of its 39 musicians, ev- ery season’s programme is built around a special theme. Each season the GCO offers a series of eclectic concerts, without forgetting its teaching and cultural outreach activities. Jointly with some of the region’s most prestigious musical institutions, it has been involved in exciting

co-productions that are part of the diverse and dynamic local music scene, in particular by being asked to perform in the main opera houses of the region between Geneva and Lausanne.

The GCO cultivates its difference by striving to be original and demanding, and to have the courage of its con- victions. Since September 2013 and for the next three seasons, the musical and artistic director behind the orchestra’s ambitions is the Dutch conductor Arie van Beek.

Following a brilliant career as a soloist, Lucas Macías Navarro went on to study orchestra conducting in Vienna and has since received his first invitations as conductor.

Principal oboe of the Royal Concertgebouw Orchestra in Amsterdam until 2015 and of the Lucerne Festival Orchestra, Lucas started his music studies at a very early age, in his home town of Valverde in Spain.

He continued his studies in Germany first with Heinz Holliger and then at the Karajan Akademie of the Berlin Philharmonic Orchestra.

He won several awards, of which First Prize of the Sony Music Foundation Oboe Competition in Tokyo, which led to invitations to the most prestigious concert halls, such

as the Berlin Philharmonic, the Concertgebouw in Am- sterdam, the Teatro Colón in Buenos Aires and the KKL in Lucerne.

His musical career was particularly marked by meeting and working with Maestro Claudio Abbado for ten years, with the Gustav Mahler Jugendorchester, Orchestra Mozart, Lucerne Festival Orchestra and the Berlin Philharmonic Orchestra.

Lorenzo Soulès was born into a family of musicians in Lyon, where he began playing the piano at the age of three. When he was eight he entered Olivier Gardon’s class at the Conservatoire à Rayonnement Régional de Paris, from which he graduated at the age of thirteen having won all the prizes.
This was a very early age to make the crucial choice of the teacher to whom the responsibility of continuing his musical studies was to be assigned. It was decided he should work with Pierre-Laurent Aimard and Tamara Stefanovich, both professors in Cologne, where Lorenzo went to live. In parallel with this he studied the complete Iberia in Barcelona with the great Alicia de Larrocha.
In 2012, at the age of twenty, he decided to embark on his first major international competition. His choice was the prestigious Geneva Competition. Lorenzo, a young man as discreet in everyday life as he is inspired and vi- brant in his music-making, met with unanimous approval from jury and public, winning all the prizes: First Prize, Coup de Coeur Breguet, Audience Prize, Young Audience Prize, and Air France KLM. Prize.

Under the benefit of the support programme offered to the winners of the Geneva Competition, Lorenzo Soulès has performed in venues and festivals such as the Zürich Tonhalle with the Geneva Chamber Orchestra, the Victoria Hall in Geneva, the Davos Festival, Festival des Haudères, Flâneries Musicales de Reims, Lyon Chopin Festival, Fes- tival du Périgord Noir, Bagatelle Young Talents and Soloists Festival in Paris, at Radio France, in Dortmund, Weimar, at the Klavierfestival Ruhr, at the Aldeburgh Music Festival...

He has also taken part in several productions organized by the Geneva Competition, including an Asian tour with the Armida Quartet, as well as a South American tour with the Hermes Quartet.

In 2013 he published his first CD recorded thanks to the Special Prize “Coup de cœur Breguet”, with solo pieces and Mozart’s 24th Concerto.