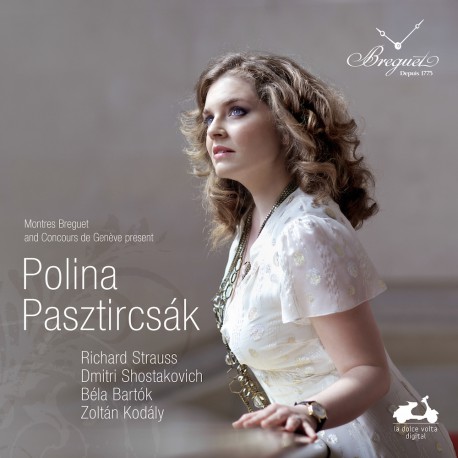 Polina Pasztircsák invites us to a high-powered recital in which she reveals remarkable homogeneity of timbre.

Then comes a choice appropriate to the Russian-Hungarian origins of the young soprano, who sings with exceptional freedom in the Seven Blok Romances of Shostakovich, which she performs with a combination of finesse and vehemence alongside her partners for the occasion, soloists from the Geneva Chamber Orchestra. And the same liberty of expression is to be found in the Hungarian cycles of Bartók and Kodály, which Polina Pasztircsák interprets with wonderful naturalness.

Born in Budapest in 1982 to a Russian mother and Hungarian father, Polina Pasztircsák began to sing and play the flute at an early age. At the age of nineteen she commenced singing lessons with Júlia Bikfalvy while pursuing a course of higher education at the University of Western Hungary, from which she graduated with a degree in cultural management. She then took classes with Mirella Freni in Vignola (Italy) and at the Conservatorio Frescobaldi of Ferrara and went on to advanced study with Adrienne Csengery, Bernadett Wiedemann, Carol Richardson-Smith and Evgeny Nesterenko.

In 2004 she won the József Simándy Singing Competition in Szeged (Hungary).
In 2009 Polina Pasztircsák was the major revelation of the Geneva Competition, where she was awarded First Prize, the Special Prize of the Cercle du Grand Théâtre (a leading or second role in a opera production at Geneva), the special “Coup de Cœur” Breguet Prize (recording of a first CD), and the Audience Prize.
She made her debut at the Teatro di Modena in 2007 in the premiere of Lorenzo Ferrero’s new opera Piccole storie, and sang Micaëla (Carmen) in 2009 under the direction of Juraj Valčuha.
Polina Pasztircsák will appear at the thirty-fourth Karlsruhe International Handel Festival in the title role of the opera Partenope. In addition to this, among the many concerts and recitals she is scheduled to give, she will sing in Geneva as a result of winning the Special Prize of the Cercle du Grand Théâtre.

Widely acclaimed as a pianist of a irreproachable virtuosity, with a high degree of artistic maturity and great presence, Aleksandra Sasha Kozlov pursues a musical double life as soloist (notable engagements have included the Weill Recital Hall in New York, the Salle Cortot in Paris, and the Sava Centre in Belgrade) and collaborative artist and vocal coach, notably alongside the legendary Mirella Freni, who introduced her to Polina Pasztircsák, thus giving birth to a duo which has now appeared all over Europe. Aleksandra Sasha Kozlov also played concerto repertoire with the Sebastian Concert Players under the direction of Daniel S. Lee. She has taken part in several radio and television broadcasts, notably for ABC, Radio France, and RSR Espace 2.

After receiving her masters in solo piano performances from the Peabody Institute of the Johns Hopkins University in Baltimore in the class of Marian Hahn, she went on to advanced study with Paola Molinari, Carrie-Ann Matheson, Roger Vignoles, Robert Van Sice, Leon Fleisher, Marc Durand and her mother, the pianist Elena Leonova. A native of New York, she studied in Europe with the support of the Nicolai Ghiaurov and Zaleski foundations.

After studying at the Conservatoire de Région de Grenoble, Philippe Villafranca entered Roland Daugareil’s class at the CNSMD in Lyon, then did postgraduate work with Annick Roussin and Boris Garlitzky. A prizewinner at several international competitions in France and abroad, he has appeared as a soloist with many formations, including the Orchestre National de Lyon. He received guidance from Igor Ozim, Tibor Varga, Lewis Kaplan, Olivier Charlier, Patrice Fontanarosa and Jean-Jacques Kantorow in masterclasses. In 2001 he won the First Prize of the International Nadia and Lili Boulanger Foundation, after which he studied at the Guildhall School of Music and Drama in London. Following a period as leader of the Orchestre National de Lorraine, he currently leads the Orchestre de Chambre de Genève.

Danila Ivanov commenced his studies at the music school of the Moscow Conservatory under Professor Burchakova, and appeared as a soloist throughout Russia from a very early age. After winning the Premio Mozart competition organised by Italian television, he was awarded the title of ‘Best junior cellist of the year’ in Russia in 1998. With support from the Académie Musicale de Villecroze, he continued his studies at the Geneva Conservatoire (class of Daniel Grogurin), then became a member of the Orchestre de Chambre de Genève. He has taken part in masterclasses given by Arto Noras, Frans Helmerson, David Geringas, and Mstislav Rostropovich. Recently he performed at the Menuhin Festival and the Sommets Musicaux de Gstaad and played as a soloist with the Orchestre de la Suisse Romande and the Orchestre de Chambre de Lausanne.

Founded in 1629, the Winterthur Collegium Musicum is one of Europe’s most venerable musical institutions. It presents roughly seventy concerts each season, including some fourty in Winterthur itself. The orchestra is an increasingly welcome visitor at major concert series in Switzerland and abroad. Since 2009 its principal conductor has been Douglas Boyd. Among the famous soloists and conductors who value long-term collaborations with the orchestra are Emanuel Ax, Daniel Hope, Janine Jansen, Fazıl Say, Jean-Yves Thibaudet, Bernard Labadie, Theodor Guschlbauer, Heinz Holliger, and Mikhail Pletnev.

In recent years the Collegium’s exemplary youth work has placed it at the forefront of this field. In addition to its wide-ranging concert programmes it has been involved in book projects, CD and DVD recordings, and a documentary film.

Born in Tehran, Alexander Rahbari studied in Vienna with Gottfried von Einem, Hans Swarowsky, and Karl Österreicher. A prizewinner at many international competitions, including Besançon and Geneva, he was invited by Herbert von Karajan to conduct the Berlin Philharmonic, then to assist him at the Salzburg Easter Festival in 1980. Alexander Rahbari went on to conduct such leading orchestras as the Orchestre de la Suisse Romande, Orchestre National de France, Czech Philharmonic, Leipzig Gewandhaus Orchestra, Sächsische Staatskapelle Dresden, NHK Orchestra Tokyo, Rotterdam Philharmonic, Stockholm Philharmonic, Tonhalle Orchester Zürich, Berliner Symphoniker, Orchestra Sinfonica Siciliana, Orquestra Ciutat de Barcelona, Prague Symphony Orchestra and New Zealand Symphony Orchestra, as well as at English National Opera. In 1985 he was appointed permanent guest conductor of the Czech Philharmonic, followed by posts as music director of the Orchestra of Belgian Radio and Television and the Orquesta Filarmónica de Málaga. In 2005 he returned to Iran with an invitation to become permanent conductor of the Tehran Symphony Orchestra.

Alexander Rahbari’s discography includes no fewer than 150 recordings, including some forty operas.