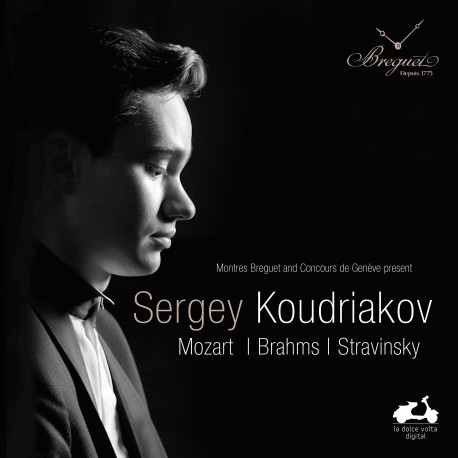 A programme tailor-made for the young Russian pianist, whose playing is at once subtle and powerful.

From Mozart to Stravinsky, Sergey Koudriakov elaborates a consummate art of touch, alternating between extreme gentleness and wild energy.
His Mozart exudes fluency and grandeur, and is devoid of unnecessary flourishes, concentrating on the nobility and beauty of music as simple as it is sublime. His Brahms is lively, profound when that is needed, and his Stravinsky glitters and sparkles: boisterous, melancholic, sardonic, violent – a whole palette of nuances unique to this marvellous musician, a pure product of the Russian school, with his striking depth of touch.

Franco Trinca, born 1962 in Rome, studied conducting, composition, piano, choral music and choral conducting at the Santa Cecilia Conservatory (Rome), with the following teachers: Bruno Aprea, Teresa Procaccini, Pieralberto Biondi and Irma Ravinale. In addition he took part in conducting masterclasses with Guennadi Rozhdestvensky at the Accademia Musicale Chigiana in Siena and with Donato Renzetti at the Accademia Musicale Pescarese. During his studies he also worked as Choral conductor and repetitor for the RAI. In December 1990 he was awarded 2nd prize (the 1st wasn't allocated) at the II Concorso Internazionale per Giovani Direttori D'Orchestra Carlo Zecchi. He followed this with two years as assistant teacher at conductors' further education courses at the Accademia Musicale Ottorino Respighi in Assisi.

He has conducted the following orchestras (selection): Orchestra Sinfonica di Bari, Orchestra Filarmonica di Genova, Orchestra Sinfonica di Sanremo, Budapest Symphony Orchestra, Symphony Orchestra of Russia, Symphonieorchester Biel, Symphonie- orchester Luzern, l’Orchestre de Chambre de Genève, Orquestra Nacional do Porto. From August 1991 he worked as 1st Kapellmeister at the Stadttheater Biel (Switzerland) and was appointed in 2001 as musical director there. Since June 1996 he has been musical director of Geneva Chamber Opera, and was appointed the same in 1997 at the Swiss Opera School at the music college in Bern/Biel.

Apart from his activities as conductor he has given many concerts as pianist, both as soloist and in chamber ensembles, and as an accompanist for singers (in April 2000 he accompanied the legendary baritone Giuseppe Taddei in a recital in Tokyo). As pianist he won prizes at the competitions of Velletri (1983, 1st prize) and Sulmona (1985, 3rd prize). As composer he has a number of works to his name. His Omaggio a Mozart (for clarinet quintet) won him 1st prize at the Rassegna Internazionale di Composizione, Briccialdi (1991).

The Geneva chamber Orchestra was founded in 1958 by Robert Dunand. Formerly known as Orchestre des Jeunesses Musicales, then Collegium Academicum, the Orchestra took on its current name in 1992 on becoming a professional orchestra. The OCG is a chamber orchestra formation with 40 musicians. It is recognised for its innovative music-making and is a supple, open-minded and enthusiastic ensemble. Its repertoire ranges from 17th century to contemporary music.

With Michael Hofstetter the Orchestre de Chambre de Genève is rediscovering its classics. It has embarked on a new approach in the interpretation of music of the 18th and early 19th century by performing on original instruments and by following the instrumental practices of the time. Michael Hofstetter has been music director of the OCG since September 2001. He succeeds Lev Markiz and Thierry Fischer. Other conductors who have appeared with the OCG include Jos van Immerseel, Christophe Coin, Armin Jordan, Rico Saccani, Roy Goodman, Marc Minkowski, Arnold Östman and Michel Corboz. The OCG has toured France, the Netherlands, Germany, Brazil and China (Beijing and Shanghaï). In summer 2002 it performed at the Rheingau Festival in Wiesbaden and in May 2003 it will travel to Germany for a series of concerts in nine different towns.