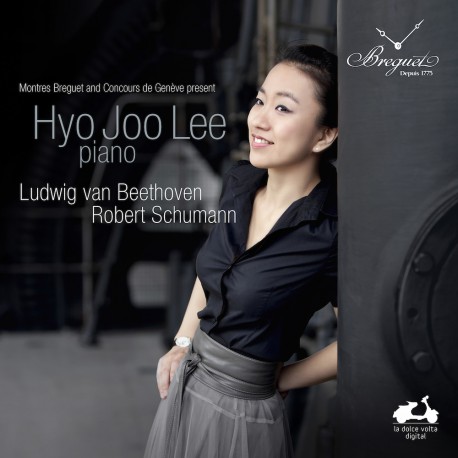 Hyo-Joo Lee tackles two monuments of the Romantic literature who subjugates with her impeccable virtuosity.

An ambitious undertaking for the young Korean pianist, who subjugated the audience with her impeccable virtuosity and her fiery temperament at the 2010 Competition. Her mastery of her instrument is obvious here from start to finish. Her Beethoven is beautifully handled, constructed in a truly Classical style: the soloist is given fine support by the Musikkollegium under the direction of Douglas Boyd, and the whole interpretation is a worthy tribute to a towering score.
The Schumann, a stunning suite of dances and episodes reflecting the mischievous yet anxious soul of the young composer, here totally convinces the listener with its bubbling freshness and fluency.

Born in South Korea in 1985, the pianist Hyo Joo Lee began her training at the age of six in the classes of Mi-Kyung Kim and Jin-Woo Chung at the Ye Won School of Arts in Seoul, before going on to study in Paris with Jacques Rouvier, Theodor Paraskivesko and Itamar Golan at the Conservatoire National Supérieur de Musique. She was also awarded an advanced concert diploma in the class of Françoise Thinat at the École Normale de Musique. She is currently studying with Mi-Kyung Kim at the Hochschule für Musik Theater und Medien in Hanover.

Hyo Joo Lee appears with many European and Korean orchestras and gives recitals all over the world.

Founded in 1629, the Winterthur Collegium Musicum is one of Europe’s most venerable musical institutions. It presents roughly seventy concerts each season, including some fourty in Winterthur itself. The orchestra is an increasingly welcome visitor at major concert series in Switzerland and abroad. Since 2009 its principal conductor has been Douglas Boyd. Among the famous soloists and conductors who value long-term collaborations with the orchestra are András Schiff, Fazil Say, Maurice Steger, Daniel Hope, Thomas Zehetmair, Reinhard Goebel, Heinz Holliger, and Michael Sanderling.

In recent years the Collegium’s exemplary youth work has placed it at the forefront of this field. In addition to its wide-ranging concert programmes it has been involved in publishing projects and recorded CDs, DVDs, and a documentary film.

Douglas Boyd is fast developing his interest in opera and in 2008 conducted Die Zauberflöte for Glyndebourne Opera on Tour. In 2009 he conducted Fidelio for Garsington Opera and returned in 2010 for Le nozze di Figaro, when his conducting received critical praise from the national press. He recently made his debut at the Opernhaus Zürich. In 2013 he will appear with Opera North.