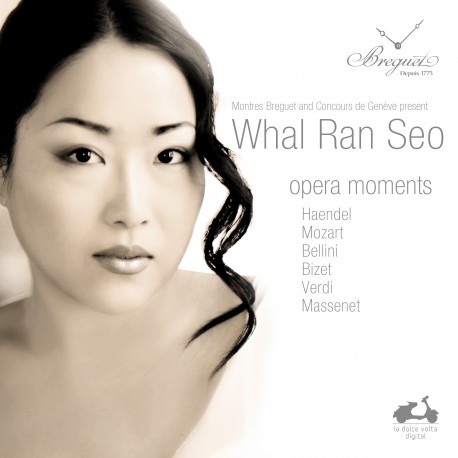 From Handel to Massenet, from Mozart to Verdi by way of Bellini and Bizet, an opportunity to savour some of opera lovers’ favourite moments.
Accompanied by a Geneva Chamber Orchestra on top form that skilfully varies styles and moods, she seduces the listener with her crystalline timbre and her delicate musicality. Her lyrical gift brings the characters to vivid life: Cleopatra laments and swears vengeance, Melissa tries her hand at seduction, Zaide falls in love, Juliette gives way to despair, Amina looks forward to the future, Gilda bewitches us, Léïla sings of love and Manon celebrates youth.
A whole gallery of famous and fascinating female protagonists, interpreted in masterly style by Whal Ran Seo.

After studying singing at Sook-Myung University in Seoul, Whal Ran Seo went on to train at the Santa Cecilia Conservatory in Rome, then at the Geneva Conservatory with Gilles Cachemaille. She also studied at the International Music Academy in Rome, where she was in Gabriella Tucci’s class, and followed classes in interpretation at the Mozarteum in Salzburg and with Virginia Zeani. She also attracted attention in the Mario del Monaco Competition in Marsala, the G. Spontini Competition in Jesi, the Spiros Argiris Competition in Sarzana and the International Competition in Palermo. In 2003 she won four prizes in the Geneva Competition for singing and opera: Second Prize, the Public Prize, the Patrick F. Liechti Prize for the best interpretation of a work by a Swiss composer, and the “Coup de Cœur Breguet” Prize.

Whal Ran Seo has given concerts in Rome and at the Se-Jong Theatre in Seoul. She took part as a soloist in the first performance in Rome of the oratorio Il Giuseppe ritrovato by Pasquale Anfossi. Until 2004 she was a member of the chorus of the Grand Theatre, Geneva.
Following her success in Geneva, Whal Ran Seo appeared in July 2004 at the Festival de Radio-France & Montpellier (concert broadcast live on France Musiques), then at the International Ohrid Festival (Macedonia) and the Guebwiller Festival (Alsace, France). She has other engagements in Europe lined up for the seasons to come.

Michael Hofstetter was born in Munich, where he trained as a pianist and conductor. He soon made a name for himself, in Germany and elsewhere, as a conductor with a rare ability to obtain authentic Baroque sound and expression with a modern orchestra. It was his recordings of two operas by Handel, Oreste in 1994 and Serse in 1996, that really drew public attention to his style. Michael Hofstetter is now recognised as a model of Baroque interpretation.

He was principal conductor of the Wiesbaden Opera from 1992 to 1997 and music director of the Giessen Opera and Symphony orchestra from 1997 to 2000. Until 2002 he taught conducting and early music at Mainz University.
Dividing his time between operatic performances and concerts, he has conducted many important productions in Germany, including “Die lustige Witwe”, “Anna Bolena” and “Tamerlano” in Berlin, “Tristan und Isolde” in Dortmund, “Médée” (Cherubini) in Koblenz, “Giulio Cesare” and “Nabucco” in Hanover, and “Il Trovatore”, “Cosí fan tutte” and “Alcina” in Hamburg.

In 2001 Michael Hofstetter was appointed conductor of the Orchestre de Chambre de Genève and within the first year he had imparted to the orchestra his savoir-faire and his concern for authenticity, gradually introducing early instruments into the ensemble (trumpets, flutes and natural horns, Classical bows, Baroque timpani) and thus creating a finely balanced sound. His inaugural performance with the OCG of Handel’s Saul was a great success, the orchestra having spontaneously adopted the style that had earned him the acclaim of the international press.

Michael Hofstetter has appeared at many festivals in Germany – notably the Rheingau Festival, the International Handel Festival in Karlsruhe, the “Mozart Matinee” concerts at the Salzburg Festival – and in other countries, including Austria (“Wiener Blut” and “Die lustige Witwe” in Vienna), Norway (“Die Zauberflöte” in Oslo) and the Netherlands (“Ariodante” at the National Opera, Enschede).
He has taken part in various productions for television (including Arte and ZDF) and has conducted various German radio orchestras (Norddeutscher Rundfunk, Südwest-Rundfunk and Westdeutscher Rundfunk).

Apart from his work with the OCG, Michael Hofstetter’s engagements for next season include “Giulio Cesare” at the Liceu in Barcelona, “Iphigénie en Tauride” at the Welsh National Opera, “Orfeo ed Eurydice” at the Royal Danish Theatre in Copenhagen, “Le Nozze di Figaro” at the Bayerisches Staatsoper, Munich, “Il Turco in Italia” at the Hamburgische Staatsoper and “Rodelinda” at the Handel Festival in Halle.

During the 2004-2005 season Michael Hofstetter will also be making his début at the Ludwigsburger Schlossfestspiele as artistic director of the festival orchestra.

The Geneva chamber Orchestra, succeeding the Collegium Academicum, was founded in 1992 by Thierry Fischer. It is now a thirty-nine-strong professional ensemble, its musicians very much involved in the life of the orchestra. In twelve years the OCG has built up an excellent reputation not only in Geneva and Switzerland but also in other countries.
Under the impetus of their first artistic director, the musicians of the OCG developed a taste for innovation, then under Lev Markiz they gained a full awareness of the wide range of possibilities offered by a chamber orchestra.

In 2001 Michael Hofstetter arrived, bringing with him his favourite repertoire and affirming the orchestra’s specific identity: authentic sound in early music, using a skilful combination of period and modern instruments.
The OCG is recognised as a unique ensemble, laying emphasis above all on tone and touch in performances aiming for authenticity. The printed scores being insufficient to guarantee fidelity to the composer’s intentions, research and study are indispensable.

Based in Geneva, the OCG divides its activity between concerts and operas, giving almost fifty performances a year throughout Switzerland and elsewhere in Europe.
Equally at home as a large formation and as a chamber ensemble, the Orchestre de Chambre de Genève favours the repertoires of the late baroque, classical and romantic periods, without neglecting works by contemporary composers, which it presents alonside earlier ones. The OCG likes to revive forgotten works as well as to take a new, personal look at well-known pieces.