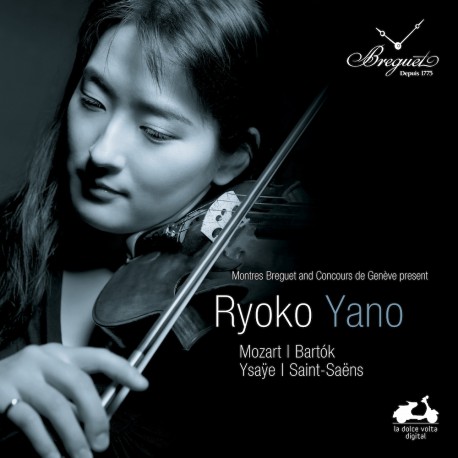 The Bartók Rhapsody has the savage, rustic character so appropriate to this music; Ysaÿe’s Poème is at once virtuosic and down to earth, and the rarely played sonata by Saint-Saëns becomes a thrilling work, Romantic and sensuous. On this debut recording, it is that element of sensuousness, along with charm and complicity, that is the dominant characteristic, reflecting the delightful personality and smile of the young Japanese musician who won over the jury and the audience at the 2004 Competition.

In Fukuoka-ken (Japan) in 1982, Ryoko Yano took up the violin at the age of four with Hisako Fukuzaki, then Mariko Tajima and finally Chikashi Tanaka. She won many national prizes in Japan from 1992, when she also gave her first concerts as a soloist. In 2000 she entered the Tokyo National University of Arts and Music. The same year, she won First Prize at the Tibor Varga International Competition in Zurich and also the Special Prize for the performance of a modern work.

She was invited to take part in the Maurice Ravel Academy in St. Jean-de-Luz, France, where she followed the classes of Jean- Jacques Kantorow and Peter Csaba, and was awarded First Prize for chamber music. At the same time she followed the teaching of Tibor Varga.
The same year she received a French government grant to study at the Paris Conservatoire with Jean-Jacques Kantorow. In 2005 she graduated with a Premier Prix (distinction).

In 2003 she won the Götz and Satz Special Prizes at the Markneukirchen International Competition, then Third Prize in the Stradivarius Competition. In 2004 she won Second Prize at the 59th Geneva International Competition (the first prize was not awarded), as well as the “Coup de Cœur Breguet” Special Prize and the Public Prize.
Her success in Geneva brought with it numerous opportunities for engagements and enabled her to make her first recording with the support of Montres Breguet SA.

Sergey Koudriakov has given concerts in Russia, France, Switzerland, England, Italy, Norway, Portugal, former Yugoslavia, the United States and Japan. He now leads an international career, following the concert tours organised by the Geneva Competition, which also enabled him to make his first recording with the support of Montres Breguet SA.

The Germano-Hungarian conductor and violinist Werner Ehrhardt was born into a musical family in 1957 and took up the violin under his father’s guidance. He followed the classes in violin and Baroque violin given by Professor Franzjosef Maier at the Hoch- schule für Musik in Cologne, before going on to advanced studies in historical performance and conducting with Sigiswald Kuijken in Brussels and Karl-Heinz Blömeke in Detmold.

In 1985 Werner Ehrhardt became artistic director of Concerto Köln, a chamber orchestra specialising in early music. With his open-mindedness, curiosity and contagious enthusiasm, Werner Ehrhardt has made Concerto Köln into one of the finest chamber ensembles on the international music scene.
Werner Ehrhardt is also known for his original programming. The thirty or so CD recordings made under his direction, many of which have received awards (German Critics Prize, Diapason d’or, etc.), include many rediscoveries and works by forgotten composers, who have thus been brought back into favour and have found their rightful place in the repertoire. Composers such as Kraus, Rosetti, Dall’Abaco and Eberl are spotlighted each year at the Cologne Early Music Festival, which Werner Ehrhardt directs.

Its rise to fame is dazzling: in less than fifteen years, the Geneva chamber Orchestra (OCG) has grown from a semi- professional ensemble to a fully-fledged, first-rate orchestra, the only one of its type on the Geneva music scene.
Spurred on by German conductor Michael Hofstetter, who took over the ensemble in 2001, the OCG has developed its own very personal sound, while aiming for authenticity in its approach to historic interpretation. Favouring a repertoire stretching from late Baroque to the Romantic period, Michael Hofstetter seeks to bring out the original colouring of the works approached by presenting them on period instruments. Gut strings, classical bows, wooden flutes and natural brass have thus found their way into the orchestra, alongside modern instruments.

But the OCG does not perform only works from the past: contemporary composers are not neglected and their works are set in perspective by performance alongside earlier compositions. The OCG also makes a point of honour of reviving or bringing greater prestige little-known or forgotten composers. Joseph Martin Kraus, Joseph Leopold Eybler and Jean-Ferry Rebel are among those who have been spotlighted in recent concerts.

Based in Geneva, the OCG presents six or seven subscription concerts in the Bâtiment des Forces Motrices each season. Its other activities, totalling about fifty performances a year, include work in collaboration with the City of Geneva (Sunday concerts, Summer serenades) and with various choirs in Geneva and French-speaking Switzerland, co-productions with other ensembles (notably the Orchestre des Pays de Savoie), an annual production with Freiburg Opera, a partnership with the Geneva International Competition, concerts for young people, radio broadcasts and CD recordings, tours in Switzerland and abroad, and also private concerts. Succeeding Thierry Fischer and Lev Markiz, Michael Hofstetter has strengthened the orchestra’s approach and raised its quality still higher, so that it now works with the finest conductors and soloists, including Armin Jordan, Paul Goodwin, Arnold Östman, Alessandro de Marchi, Nathalie Stutzmann, Aldo Ciccolini and Matthias Goerne.

The orchestra’s success, which has already been recognised in artistic milieus, was recently acclaimed by the world of business: in May 2005 the OCG was awarded the Michel Baettig Prize in recognition of its exceptional achievement and the accomplishment and dynamism of its team.