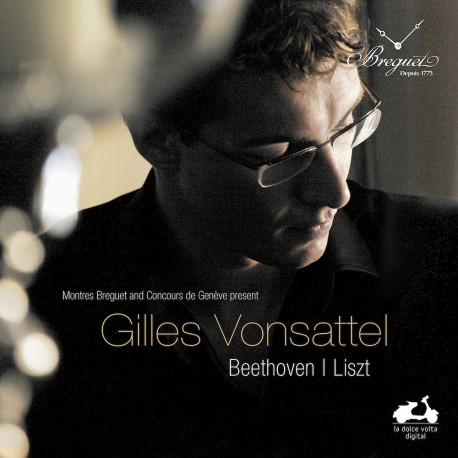 Gilles Vonsattel is rigorous and thoughtful interpreter, as is demonstrated by his programme.

Beethoven’s First Concerto combines impeccable taste with a virtuosity always at the service of the music, well supported by a first-rate orchestra and conductor. The Liszt pieces are quite dazzling: glittering when the music calls for it, shimmering and sensitive when it grows more profound. The disc ends in a blaze of glory with a masterly reading of the Dante Sonata, a work whose celebrity has not diminished its tragic and dramatic beauty, conveyed here with remarkable maturity.

Swiss-born pianist Gilles Vonsattel, winner of the Walter W. Naumburg Foundation’s 2002 International Piano Competition, made his Lincoln Center debut that year at Alice Tully Hall, and has appeared as soloist with the Utah Symphony, Naples Philharmonic, the Grand Rapids Symphony, the National Symphony of Ireland, and the Boston Pops. With repertoire that ranges from Bach’s Art of the Fugue to Xenakis, Gilles Vonsattel is an artist of uncommon breadth equally at home in solo and chamber music. He has performed in major venues such as Boston’s Symphony Hall, Cleveland’s Severance Hall, Herbst Theatre in San Francisco, the Benedict Music Tent at the Aspen Music Festival and Tokyo’s Opera City Hall. Most recently, he was the top prizewinner at the 2006 Geneva International Music Competition (2nd Prize – 1st not awarded, Audience Prize, «Coup de Cœur Breguet» and «Mandarin Oriental» Special Prizes), leading to numerous European engagements in the 2007-2008 season and as well as the present recording with L’Orchestre de Chambre de Genève. Gilles Vonsattel was also a prizewinner at the Cleveland and Dublin Piano Competitions. He has been heard frequently on National Public Radio’s Performance Today, and gave the world premiere of Ned Rorem’s Sound Points at Lincoln Center’s Alice Tully Hall.

Recent chamber music appearances include debuts at the Musée du Louvre in Paris and at the Library of Congress in Washington, D.C. He has participated in the Aspen Music Festival and the Music Academy of the West. Gilles Vonsattel has appeared in recital at the Caramoor International Festival and was one of the festival’s Rising Stars series in 2006. He is a member of the prestigious Chamber Music Society of Lincoln Center’s and has collaborated with artists such as Kim Kashkashian, Cho-Liang Lin, Paul Neubauer, David Shifrin, Gary Hoffman and Yo-Yo Ma.

Gilles Vonsattel has shown a significant interest in expanding the conventional classical concert experience, appearing alongside pop and rock groups, most recently opening for Eluvium and Amiina at New York’s Wordless Music Series.
His 2007-2008 season includes recitals at La Roque d’Anthéron, at the Musée d’Orsay, Zürich’s Tonhalle, and at Atlanta’s Spivey Hall, as well as numerous appearances at New York’s Lincoln Center. His recording of Bartók’s Contrasts for Deutsche Gramophon is available for download on iTunes.

Gilles Vonsattel has studied with pianist David Deveau in Boston, received his B.A. in political science and economics from Columbia University and his M.M. from The Juilliard School, where he worked with Jerome Lowenthal.

Slovakian conductor Juraj Valčuha studied composition, conducting and cymbalon at the Bratislava Conservatory. At the age of nineteen he went to St. Petersburg and took postgraduate courses at the National Conservatory, studying composition, and conducting with Ilya Musin. In 1998 a scholarship allowed him to move to Paris where he studied conducting at the Conservatoire National Supérieur de Paris with Janos Fürst. He also attended Masterclasses of Jorma Panula.

During the 2007- 2008 season he will lead the RAI Orchestra in Turin, the Lahti Symphony Orchestra, the Philharmonia Orchestra in London, the Orchestre Philharmonique de Monte-Carlo, the Sinfonie Orchester from the Saarländischer Rundfunk Saarbrücken as well as the Rotterdam Philharmonic, the Oslo Philharmonic, the DSO (Deutsche Symphonie Orchester) in Berlin and the Orchestra del Teatro San Carlo in Napoli. He will conduct Madama Butterfly in Paris and a Midsummer Night ́s Dream in Nancy and will return to the Teatro Comunale di Bologna for concerts.

In the autumn of 2008 he will make his debut with the Gewandhaus Leipzig, with the Bayerische Staatsoper in Munich with Madama Butterfly and will conduct the Orchestre Philharmonique de Radio-France in Paris.

Its rise to fame is dazzling: in fifteen years, the Geneva chamber Orchestra (OCG) has grown to a fully-fledged, first-rate orchestra, the only one of its type on the Geneva music scene. Spurred on by German conductor Michael Hofstetter, who took over the ensemble in 2001, the OCG has developed its own very personal sound, while aiming for authenticity in its approach to historic interpretation. Favouring a repertoire stretching from late Baroque to the Romantic period, Michael Hofstetter seeks to bring out the original colouring of the works approached by presenting them on period instruments. But the OCG does not perform only works from the past: contemporary composers are not neglected and their works are set in perspective by performance alongside earlier compositions. The OCG also makes a point of honour of reviving or bringing greater prestige little-known or forgotten composers. Joseph Martin Kraus, Joseph Leopold Eybler and Jean-Ferry Rebel are among those who have been spotlighted in recent concerts.

Succeeding Thierry Fischer and Lev Markiz, Michael Hofstetter has strengthened the orchestra’s approach and raised its quality still higher, so that it now works with the finest conductors and soloists, including Armin Jordan, Paul Goodwin, Arnold Östman, Alessandro de Marchi, Christopher Hogwood, Arie van Beek, Aldo Ciccolini, Kathia and Marièlle Labèque, Fazil Say, Nicholas Angelich, Jean-Guihen Queyras, the Trio Wanderer or Matthias Goerne, Bo Skovhus, Max Emanuel Cencic, Nathalie Stutzmann, María Bayo and Nathalie Manfrino. Not to be sneezed at the conductors from tomorrow Juraj Valcˇuha and Patrick Lange. Based in Geneva, the OCG presents six or seven subscription concerts in the Bâtiment des Forces Motrices each season (often recorded by the Radio Suisse Romande ). Its other activities include work in collaboration with the City of Geneva ( Sunday concerts, Summer serenades) and with various choirs in Geneva and French-speaking Switzerland, co-productions with other ensembles (notably the Orchestre des Pays de Savoie), productions with the theatre in Geneva (ballet and operas), a partnership with the Geneva International Competition, radio broadcasts and CD recordings, tours in Switzerland and abroad.

In March 2006 the OCG has performed in Germany and received rave reviews of its exceptional achievement and an invitation for the Rheingau-Festival (Wiesbaden) in 2008. During the summer 2007 performances has taken the Orchestra to Spain.
The last CD-recording of the OCG, conducted by Michael Hofstetter, includes Arias from Rossini with the counter-tenor Max Emanuel Cencic. The CD will be available on EMI Virgin Classics.