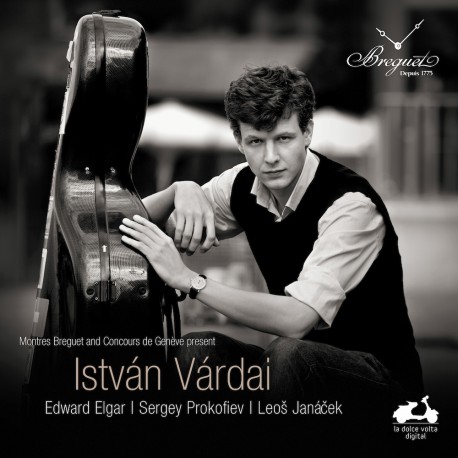 This disc brings out particularly well the effusive lyricism of the cello.

Two of them are key works in the instrument’s repertoire: the Sonata op.119 of Prokofiev (1949), one of the pieces most frequently played in cello recitals, and the Concerto op.85 of Elgar (1919), a favourite with concerto soloists for its rare balance between pyrotechnics and expressive profundity, which the young Hungarian cellist defends with nobility, lyrical continuity and natural virtuosity, perfectly supported by the Geneva Chamber Orchestra.
To complete his triptych, István Várdai has chosen Janáček’s ‘Fairytale’ (1910), a masterpiece whose less obvious lyricism is magisterially served by an interpretation emphasising clarity of line and narrative structure, avoiding the pitfall of facile grandiloquence.

Born in Hungary, István Várdai studied with László Mez ̋o at the Franz Liszt Academy of Budapest from 2004, and entered Reinhard Latzko’s class at the Vienna Academy of Music in 2005. He has also been taught by Natalia Gutman, Natalia Shakhovskaya, János Starker, and Frans Helmerson.
Since making his debut in 1998 at The Hague (Netherlands), he has appeared in London, Florence, Prague, Kobe, Frankfurt, Moscow, Munich, St. Petersburg, New York, and China. He has given many concerts as a soloist under the direction of Ádám Fischer and Zoltán Kocsis, with the St. Petersburg Symphony Orchestra and the Franz Liszt Chamber Orchestra (direction János Rolla). In 2006, he played Beethoven’s Triple Concerto with Jenö Jandó (piano), Barnabas Kelemen (violin), and the Pécs Philharmonic Orchestra (Hungary) under the direction of Zsolt Hamar, then Haydn’s Concerto in D with the Austro-Hungarian Orchestra. He has performed Tchaikovsky’s Rococo Variations with the Franz Liszt Chamber Orchestra in Hungary and in Prague, Moscow, and London.

Following his success at the Geneva Competition, István Várdai has received many engagements for the period from 2009 to 2011, including concerts as a soloist with the Orchestre de la Suisse Romande, the Orchestre de Chambre de Genève, and Collegium Musicum Basel, and recitals all over Europe, notably the Alba, Radio France-Montpellier, and Davos festivals.

Born in Kecskemét (Hungary) in 1984, Balázs Fülei began his musical studies with Katonáne Szabó Judit, and then entered the Béla Bartók Conservatory where he was taught by Gábor Eckhardt and Balázs Reti. He completed his studies with György Nádor and Balázs Reti at the prestigious Franz Liszt Academy in Budapest, from which he obtained his concert diploma with honours in 2008. Alongside this, he also participated in masterclasses with Amadeus Webersinke, Florent Boffard, Ferenc Rados, Gábor Csalog, Norma Fischer, Zoltán Kocsis, Bertrand Ott, Jan Marisse Huizing, Jan Wijn, Boris Berman, and György Kurtág.

Balázs Fülei also received a special prize at the 13th International Tchaikovsky Competition in Moscow, and appeared at the Amsterdam Concertgebouw, Diligentia Den Haag, and in various other European capitals as part of the New Masters on Tour programme in 2007.
In May 2006 he recorded a DVD of the ballades of Chopin and Liszt in Tokyo, going on to make his debut at Carnegie Hall in New York in 2008.

Balázs Fülei is the partner of choice of István Várdai, with whom he shares a passion for chamber music and for giving first performances of works by Hungarian composers.

Under the leadership of Michael Hoffstetter, successor to Thierry Fischer and Lev Markiz, the OCG (Geneva Chamber Orchestra) has taken its rightful place on the musical scene in Switzerland and abroad and has joined the ranks of the top orchestras, as the only one of its kind in the Alemannic musical world.
In addition to the use of natural brass and Classical bows for those repertoires which require them, Michael Hoffstetter has succeeded in giving the OCG a highly original identity chiefly through his quest for the style appropriate to every work it plays, from the seventeenth century to our own time.

After an exceptionally successful tour of Germany in 2006, the orchestra was invited back to the Rheingau Festival in 2008. It gave the official concert of the Americas Cup in Valencia in June 2007; the subsequent tour with María Bayo ended at the Festival of San Sebastián, where the concert was broadcast live by the Radio Nacional de España, France Musique, and Radio Suisse Romande-Espace 2.

The OCG has become a frequent visitor to the recording studio. Its most recent CD, a programme of Rossini arias conducted by Michael Hofstetter and sung by the countertenor Max Emanuel Cencic, released on EMI-Virgin Classics, won the Prix de l’Académie du Disque Lyrique in April 2008. Another recording on the Universal label is planned for 2010.

In 2009 Simon Gaudenz won the Deutscher Dirigentenpreis, the most richly endowed award for conductors in Europe. Among his many other distinctions are first prize in the Gennady Rozhdestvensky Competition in 2006, the scholarship of the Akademie Musiktheater Heute of the Deutsche Bank, and sponsorship from the Dirigentforum des Deutschen Musikrats (2004-2009). In 2009 he was distinguished for the third time by the Aargauer Kuratorium of the Schweizer Kulturstiftung for his “contribution to artistic creation”.

An internationally sought-after guest conductor, he has appeared with the Symphonieorchester des Bayerischen Rundfunks, the Orchestre National de France and Orchestre National de Lyon, the Tonhalle-Orchester Zürich, the Deutsche Symphonie-Orchester Berlin, the Sinfonieorchester Basel, the Monte Carlo, Strasbourg, and Luxembourg Philharmonic Orchestras, the Düsseldorfer and Stuttgarter Symphoniker, the Beethoven Orchester Bonn, and the Tiroler Sinfonieorchester, among others.

Since the 2004/05 season Simon Gaudenz has been principal conductor and artistic director of the Collegium Musicum Basel, after four years as artistic director of camerata variabile basel.
He has made many radio and CD recordings.
Simon Gaudenz studied clarinet, composition and conducting in Lucerne, Graz, Freiburg, and Salzburg. He has been influenced by collaborations with Leon Fleisher, Kurt Masur, David Zinman, Eliahu Inbal, and Reinhard Goebel and Arnold Östman in the field of historical performance practice.

He has been invited to be a jury member at the Gennady Rozhdestvensky Competition in Moscow in 2010 alongside Sir Simon Rattle, Bernard Haitink, Paavo Berglund, and Neeme Järvi.