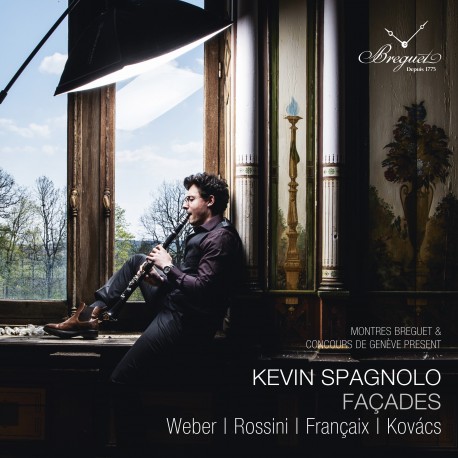 After winning First Prize at the prestigious Geneva International Competition in 2018, Kevin Spagnolo was appointed principal clarinettist of the Swedish Chamber Orchestra the following year. This recording is his first as a soloist.

It is an album that is very much in keeping with his radiant personality. For this artist exudes joie de vivre while also revealing quite outstanding virtuosity. The works on this album cover more than two centuries of music. They evoke both the world of opera and the art of entertainment, in the noblest sense of the word.

Concerto for clarinet and orchestra

Clarinet Concerto no.1 in F minor

Building on an exceptional mastery of the clarinet, Kevin Spagnolo (born in 1996) is known for his astonishing spontaneity and his search for freedom, pushing his playing to the very limits of the possibilities of his instrument, with which he more seems to make than one. This insatiably curious and mischievous musician seeks to share all his emotions with the public and is constantly in pursuit of new repertory, as is shown by his recent affection for chamber music and klezmer music.

In 2018, at the age of just twenty-two, Kevin won First Prize at the Geneva International Music Competition, one of the world’s most important and prestigious contests. He was the youngest clarinettist in the history of the competition ever to win this key award. Since then he has been regularly invited to perform recitals, chamber music and concertos at leading festivals and on tour.

His recitals and tours with such pianists as Carlos Sanchís, Chloe Jiyeong Mun, Théo Fouchenneret and Lorenzo Soulès or with the Quatuor Voce have taken him to the Festival Radio France Occitanie Montpellier, Festival des Haudères, Festival de Jeunes Talents in Paris and Concerts d’Été à Saint Germain in Geneva, among other venues.

Kevin has appeared as a soloist with the Orquesta Sinfónica de Aguascalientes and Román Revueltas, the Brussels Philharmonic and Antonio Saiote, the Orchestre de Chambre de Genève and Pierre Bleuse, the Mariinsky Theatre Orchestra (in the Copland Concerto) with Anton Shaburov thanks to the Musical Olympus Foundation, the Swedish Chamber Orchestra with Martin Fröst and once with Michael Collins, and the Orchestra Regionale Toscana on a tour of Tuscany with Nil Venditti.

Since 2019 Kevin Spagnolo has been principal clarinet of the Swedish Chamber Orchestra under its chief conductor Martin Fröst.

Michael Collins is one of the most complete musicians of his generation. With a continuing, distinguished career as a soloist, he has in recent years also become highly regarded as a conductor. He is Artistic Director in Residence of the London Mozart Players, and from 2010 to 2018 he was the Principal Conductor of the City of London Sinfonia. Recent guest conducting and play-directing highlights have included engagements with the Melbourne Symphony Orchestra, BBC Symphony Orchestra and the Zurich Chamber Orchestra.

In January 2021 Michael gave the debut performance of the new ensemble Wigmore Soloists, a new Associate Ensemble funded by the Wigmore Hall. Led by Michael Collins and violinist Isabelle van Keulen, Wigmore Soloists will see leading instrumentalists coming together to perform a wide range of chamber music repertory from duets to works for up to ten musicians.

Michael Collins has been committed to expanding the clarinet repertory for many years. He has given premieres of works such as John Adams’s Gnarly Buttons, Elliott Carter’s Clarinet Concerto, Brett Dean’s Ariel’s Music, and Mark-Anthony Turnage’s Riffs and Refrains, which was commissioned by the Hallé Orchestra.

He received the Royal Philharmonic Society’s Instrumentalist of the Year Award in 2007 in recognition of his pivotal role in premiering repertory by some of today’s most highly regarded composers.

In the Queen’s Birthday Honours of 2015, Michael Collins was awarded an MBE for his services to music. He plays on Yamaha clarinets.

The Swedish Chamber Orchestra, a tight-knit ensemble of thirty-nine players, was founded in 1995 and made its USA and UK debuts in 2004 performing at Lincoln Center and the BBC Proms. The New York Times wrote of their performance: ‘It has been a longstanding complaint in the classical music world that as recordings and jet travel have shrunk the globe, an international sound has been fostered that has filtered out regional differences in timbre and interpretation . . . and every now and then an orchestra comes along with a sound that is surprising and fresh.’

Martin Fröst is the orchestra’s chief conductor, taking over the baton from Thomas Dausgaard who held the post from 1997 to 2019. With Fröst the orchestra is embarking on a series of Mozart recordings for Sony Classics.

Since 2004 the Swedish Chamber Orchestra has toured regularly throughout Europe, made its debut in Japan and returned to the United States and Lincoln Center in 2008, 2013 and 2017. Other venues and festivals include the Salzburg Festival in 2010, the Schleswig-Holstein Music Festival in 2003, 2014 and 2020, the BBC Proms in 2010 and 2018 and a Vienna Konzerthaus residency in 2019.

With its range of repertory and styles the ensemble has established its own unique voice, as the Münchner Abendendzeitung testifies: ‘Their acclaimed recordings of Schumann and Beethoven have made these three dozen musicians from Sweden into a top tip . . . In concert such miracles are sometimes a disappointment. Not so with the Swedish Chamber Orchestra at the Salzburg Festival.’